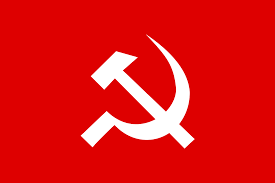 As of 2018, CPI(M) is leading the state government in Kerala and has representation in the following Legislative assemblies in the states of Kerala, West Bengal, Tripura, Rajasthan, Himachal Pradesh, Odisha and Maharashtra.[11] As of 2018, CPI(M) claimed to have 1 million members.[12] The Politburo is the supreme organ of the Communist Party of India (Marxist).[13] However, in between two party congresses, the Central Committee is the highest decision making body.[13]

Communist Party of India(Marxist) emerged from a division within the undivided Communist Party of India (CPI), which was formed on 17 October 1920. The undivided CPI had experienced a period of upsurge during the years following the Second World War. The CPI led armed rebellions in Telangana, Tripura, and Kerala. However, it soon abandoned the strategy of armed revolution in favour of working within the parliamentary framework. In 1950, B. T. Ranadive, the CPI general secretary and a prominent representative of the radical sector inside the party, was demoted on grounds of left-adventurism.

Under the government of the Indian National Congress party of Jawaharlal Nehru, independent India developed close relations and a strategic partnership with the Soviet Union. The Soviet government consequently wished that the Indian communists moderate their criticism towards the Indian state and assume a supportive role towards the Congress governments. However, large sections of the CPI claimed that India remained a semi-feudal country, and that class struggle could not be put on the back-burner for the sake of guarding the interests of Soviet trade and foreign policy. Moreover, the Indian National Congress appeared to be generally hostile towards political competition. In 1959 the central government intervened to impose President’s Rule in Kerala, toppling the E.M.S. Namboodiripad cabinet (the sole non-Congress state government in the country).

The basis of difference in opinion between the two factions in CPI was ideological – about the assessment of Indian scenario and the development of a party programme. This difference in opinion was also a reflection of a similar difference at international level on ideology between the Soviet and Chinese parties. The alleged ‘right wing’ inside the party followed the Soviet path and put forward the idea of joining hands with the then ruling party – Indian National Congress. Moreover the faction of CPI which later became CPI(M) referred to this as a revisionist approach of class collaboration. It was this ideological difference which later intensified, coupled with the Soviet-Chinese split at the international level and ultimately gave birth to CPI(M).[14]

Hundreds of CPI leaders, accused of being pro-Chinese, were imprisoned. Thousands of Communists were detained without trial.[15] Those targeted by the state accused the pro-Soviet leadership of the CPI of conspiring with the Congress government to ensure their own hegemony over the control of the party.

At a CPI National Council meeting held on 11 April 1964, 32 Council members walked out in protest, accusing Dange and his followers of “anti-unity and anti-Communist policies”.[16]

The leftist section, to which the 32 National Council members belonged, organised a convention in Tenali, Andhra Pradesh 7 to 11 July. In this convention the issues of the internal disputes in the party were discussed. 146 delegates, claiming to represent 100,000 CPI members, took part in the proceedings. The convention decided to convene the 7th Party Congress of CPI in Calcutta later the same year.[17]

Marking a difference from the Dangeite sector of CPI, the Tenali convention was marked by the display of a large portrait of the Chinese Communist leader Mao Zedong.[17]

At the Tenali convention a Bengal-based pro-Chinese group, representing one of the most radical streams of the CPI left wing, presented a draft programme proposal of their own. These radicals criticised the draft programme proposal prepared by M. Basavapunniah for undermining class struggle and failing to take a clear pro-Chinese position in the ideological conflict between the CPSU and CPC.[18]

At the Siliguri Party District Conference, the main draft proposal for a party programme was accepted, but with some additional points suggested by the far-left North Bengal cadre Charu Majumdar. However, Harekrishna Konar (representing the leadership of the CPI left wing) forbade the raising of the slogan Mao Tse-Tung Zindabad (Long live Mao Tse-Tung) at the conference.

Parimal Das Gupta’s document was also presented to the leadership at the West Bengal State Conference of the CPI leftwing. Das Gupta and a few other spoke at the conference, demanding the party ought to adopt the class analysis of the Indian state of the 1951 CPI conference. His proposal was, however, voted down.[19]

The Calcutta Congress was held between 31 October and 7 November, at Tyagraja Hall in southern Calcutta. Simultaneously, the Dange group convened a Party Congress of CPI in Bombay. Thus, the CPI divided into two separate parties. The group which assembled in Calcutta would later adopt the name ‘Communist Party of India (Marxist)‘, to differentiate themselves from the Dange group. The CPI(M) also adopted its own political programme. P. Sundarayya was elected general secretary of the party.

In total 422 delegates took part in the Calcutta Congress. CPI(M) claimed that they represented 104,421 CPI members, 60% of the total party membership.

At the Calcutta conference the party adopted a class analysis of the character of the Indian state, that claimed the Indian bourgeoisie was increasingly collaborating with imperialism.[20]

Parimal Das Gupta’s alternative draft programme was not circulated at the Calcutta conference. However, Souren Basu, a delegate from the far-left stronghold Darjeeling, spoke at the conference asking why no portrait had been raised of Mao Tse-Tung along the portraits of other communist stalwarts. His intervention met with huge applauses from the delegates of the conference .[20]