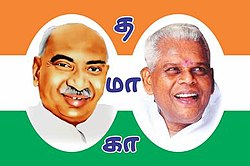 Tamil Maanila Congress (M) (TMC) is a political party in the state of Tamil Nadu, India. The party was founded on 29 March 1996. The party was formed by G. K. Moopanar along with a major fraction of leaders from Tamil Nadu Congress Committee (state unit of Indian National Congress).[2]

G.K Vaasan, the son of the founder G.K Moopanar was chosen to lead the party in 2002 by the party officials after the death of Moopanar. TMC was later merged with Congress from 2002 to 2014. The TMC was again formed after a split from Congress on November 2014.

The party’s mission is to provide:

The party strongly believes the need to realm India’s pluralist traditions. G. K Moopanar always maintained to preserve the political decency & avoided a culture of violence and divisive politics. He strongly believed in grassroots democracy with people as the stakeholders in all the developmental projects.

Similarly, the party president G. K Vasan believes the Tamil literature ‘Thirukkural on Wisdom, Values and Ethics is certain to be recognized as the ‘National Book‘ and the party shall put forth its constant effort in realizing the dream of millions of Tamil lovers and scholars.[5]

Tamil Maanila Congress (M) is existing in a political era of aggressive and conflict oriented politics. The party and the founder were crowned for taking a principled position in 1999 to reserve its political support to then ruling Union Government; a testing time for its secular ideology.[6]

G. K Moopanar was an affable Political Strategist and a Trouble Shooter who never stooped to power rather led a pure and simple life of an ordinary citizen.[9] But there have been an instances, where G. K Moopanar to be crowned for top leadership yet he preferred to identify the leaders for top job and chose to work in strengthening the party.[10] The party born out of historical need to defend the principal system of transparent, clean and civilized politics. Moopanar in the year 1996 sensed the need to formulate a political party, which satisfies the regional aspiration and ethos and formed the Tamil Maanila Congress.[11]

In the early 1970’s Indra Gandhi wished to integrate both Indian National Congress (O) and Indian National Congress (I) and merged both the parties. Moopanar who was faithful to the parent body was made the president of the Congress party in Tamil Nadu. The dramatic rise and spread of the Dravidian movement in the state shrinked the Congress, once the largest political party in the state.[13][14]

Moopanar was committed to secularism and cultural pluralism, who completely devoted himself for the service to humanity.[16] In recognizing his contribution to the nation, Indian postal department commemorated him by releasing a stamp in 2010.[17]

In 1998, G K Moopanar’s efforts ensured to declared a classical status to Tamil language by then Union Government in the year 2004.[18][19]

After the death of his father G K Moopanar in 2001, G. K Vasan was elected without opposition as the President of the TMC by the MLA’s, MP’s and senior officals of the party.[20] After the death of his father Vaasan merged the TMC with the congress in 2002.[21] The Dravida Munnetra Kazhagam and Congress together secured 163 of the 234 seats in the 2006 Assembly elections.[22] On 3 November 2014, Vaasan split the party from Congress to start the Tamil Manila Congress again.[23]

On March 2019, TMC made alliance with the AIADMK in for the 2019 Indian general elections and was allotted one seat in the Thanjavur parliamentary constituency, contesting on the AIADMK symbol.[24]

G. K Vasan in one among his numerous contributions to language Tamil and for the state of Tamilnadu; had extended his supremacy as Union Minister of Shipping in 2014 to honor the legacy of freedom fighters. He commemorated the freedom fighters, K. Kamarajar and V.O Chidambaram Pillai by re-titling the ‘Ennore Port’ as “Kamarajar Port“[25] in Chennai, Tamilnadu and ‘Tuticorin Port’ as ‘V.O. Chidambaranar Port’[26] in Tuticorin, Tamilnadu.

G. K Vasan had also raised his objections and extended kindness for the welfare of Tamils in Sri Lanka and living elsewhere.[27] In spite of His association with then ruling party, the Indian National Congress (in UPA regime) and holding a ministerial rank in the Union Government; He opposed the moves, the Government of India had extended to Sri Lankan government that deemed to be against the interests of island’s Tamil citizens.[28][29][30]

Under the leadership of G. K Vasan, the party is more concerned about the governance becoming mystified and administrations getting complicated. The party believes democracy is a culture and not the elections. The party shall govern Corruption Free Public Administration and offer Sublime Law and Order without favoritism or discrimination. G. K Vasan, calls eradicating corruption is another war for independence to serve the people and make our great nation, a prosper.[citation needed]

The party president G. K Vasan assures the nation for a Transparent and Clean Administration. The party shall propose the passage of Lokayukta legislation in the state of Tamil Nadu, an establishment of anti-corruption institution to combat corruption in the government administrations.[31]

The party shall take up strong efforts to ‘Live Telecast the Assembly Proceedings’ and practice fair and free conduct of democracy in the floor of assembly house. “Right to Know” is the basic privilege of citizens in this great nation. Therefore, the live telecast is the primary right and it will pave way for educating the citizens to know the process of government, discover the truth and strengthen individual capacity in decision-making process.[3]

G. K. Vasan, during his role as member of Consultative Committee for the Ministry of Agriculture between 2002-2004, dynamically backed the measures for National Food Security and building a Vibrant Rural Economy.[32] In the recent protest by Tamil Nadu farmers in Jantar Mantar, New Delhi (between April–May 2017), which lasted for 41 days. G. K Vasan, himself a farmer took a leadership initiative to facilitate a meeting between agitating farmers and President of India, Shri Pranab Mukherjee.[33][34]

The party strongly advocates the Women Reservation Bill. Vasan constantly bid for true gender equality. He believes a true change in women political representation is not by a woman from the traditional political base, rather from a village who is honest, sincere, committed and a woman rising from the grassroots to the democratic house, is the candid success.

The party’s women’s wing is striving to realize the goals; it has put forth.

The party asserts prohibition of alcohol is the need of the hour and concerned over the present level of alcohol consumption among all sections of people including women and students. The president of the party Vasan strongly believes that state sponsored alcohol is not a revenue generator, but rather a social disaster.[35] In action, the party has effectively demonstrated various campaigns, agitations and personal suit to put an end to alcoholism in the state.[36] In one such effort, the party launched a statewide signature campaign in 2015 to create an awareness among the citizens and exert pressure on ruling government to abolish Alcoholism.[37] The party submitted the public receipts with a memorandum to then Hon. Governor Rosaiah, urging a statewide prohibition of Alcohol.[38]

The party also opined to administrators to set up a rehabilitation centers for the citizens’ welfare and facilitate alternative employment for the existing TASMAC employees without derailing their livelihood.The party has considered prohibition of alcohol as its one of its mission statements.

The party president, Vasan, Within 72 hours of party revival in 2014, visited Rameswaram to interact with the fishermen community and extend his support to them.[39][40][41][42] The party feels the amicable solution to prevailing watershed can be a ‘bottoms-up approach’ in a way based on cultural, economic habits and needs of participating people from either nation. There is a historical connectivity among both citizens and one cannot lightly impose a nautical barrier and exert navy force. The party strongly believes an independent Union Ministry of Fisheries is required to address the present day challenges in a diplomatic, economic and technological framework.

The Tamil Maanila Congress (M) is a grassroots pluralistic party which maintains intraparty democracy, a consensual approach to decision making; self-respect and gender equality. The party strongly believes in accommodating all sections of people in mainstream politics and confer not only reservation but due recognition, a respectable relationship across all human spectrum.[citation needed]

The party has launched the ‘e-kamarajar app’ for the benefit of primary school children to bridge the gap in education affordability, provide free accessibility to latest educational contents, learning methods and improve the primary school completion ratio. The application is designed to provide fundamentals in Mathematics, English, Tamil and Brain Gym activities.[43]

The 11th Tamil Nadu state legislative assembly elections were held simultaneously with the Indian Parliamentary Election to 11th Lok Sabha. Tamil Maanila Congress along with its ally political partners, again performed a landslide victory by winning the complete 39 parliamentary seats available in the state, Tamil Nadu. The party led in front by winning 20 out of 20 contested parliamentary seats by securing 7,339,982 (25.6%) votes.[citation needed]

In the latest election to 15th Tamilnadu State Assembly, the party participated together in a grand alliance PWF(People Welfare Front) and contested the election. The party was allotted ‘Coconut Farm’ as its election symbol and fielded 26 high quality candidates.[46][47]